It’s taken a while, and we’d like to explain

TL;DR: Day jobs, families, and life in general called our bluff on releasing this app in a more timely fashion. But we’re really close to a public beta. 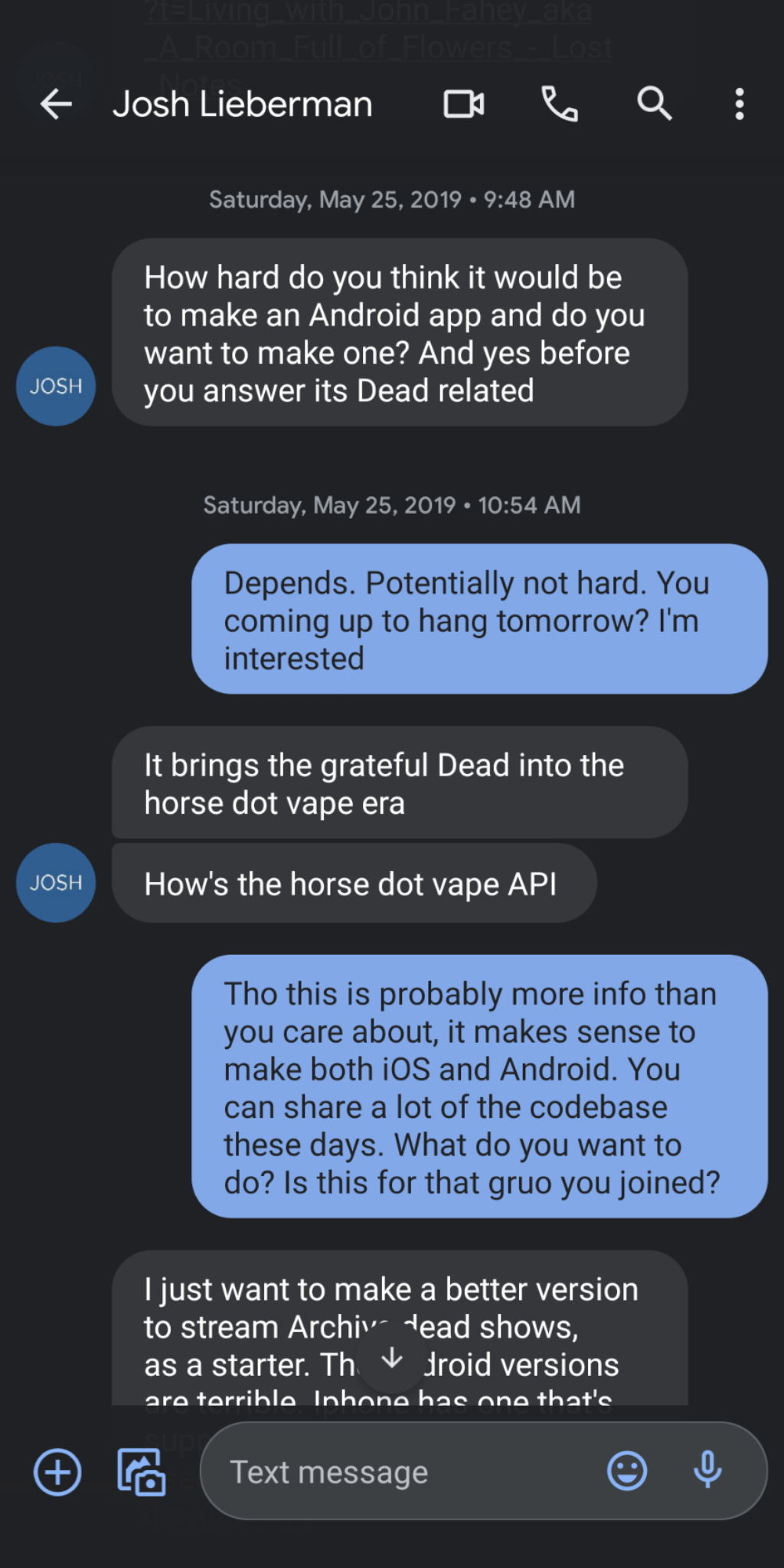 JOSH: Potentially not that hard.” The hubris. That text message exchange was over two years ago. Since then we have each had a second child, purchased new homes, and survived a pandemic. It turns out it’s “potentially very hard.” So why is this in fact taking us so long? And do you want to explain the above “horse dot vape” reference?

JAMES: What took so long? 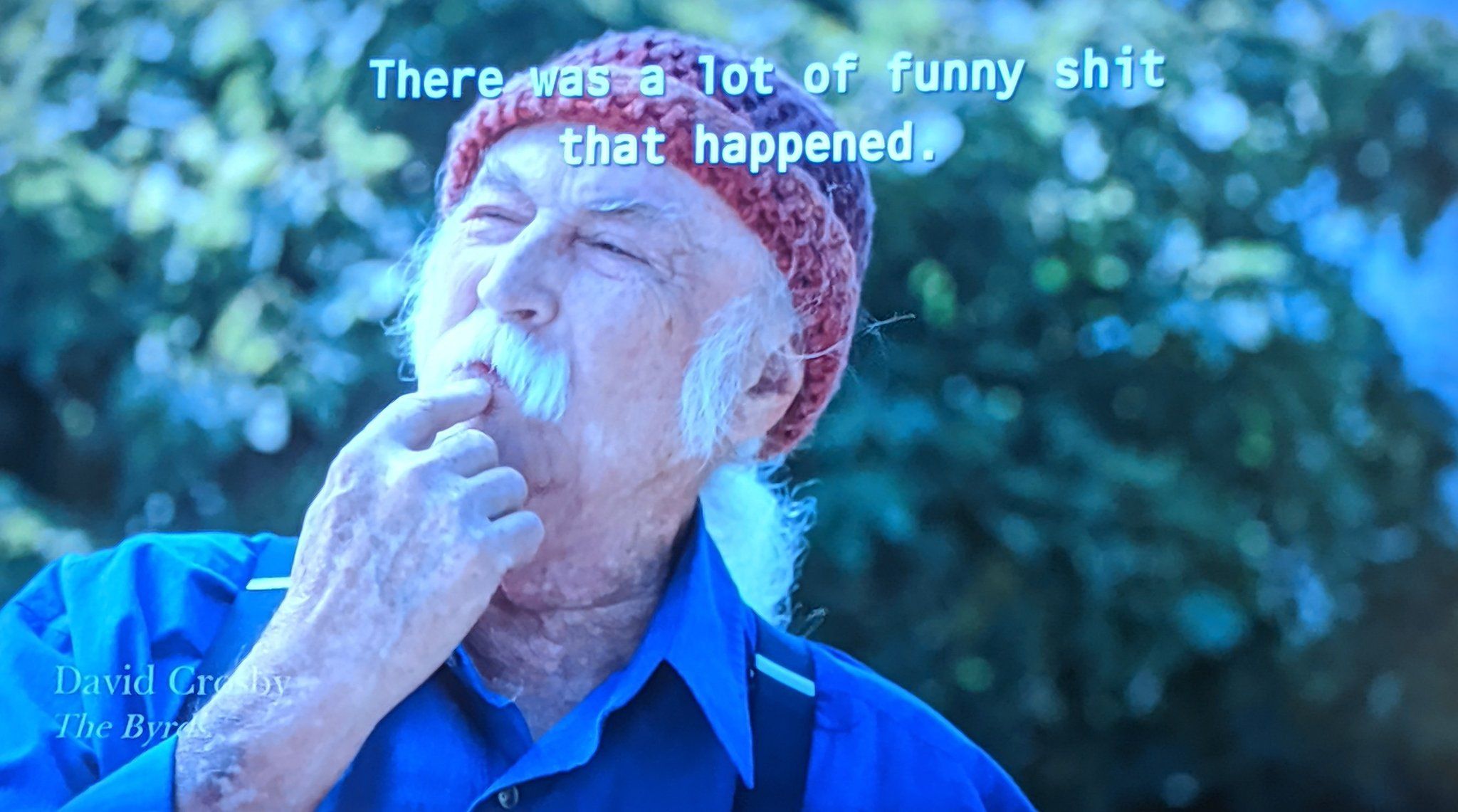 Honestly, everything took so long. When I said yes, I said yes not meaning “yeah, I’ve done this before,” I said yes meaning “yeah, I could probably figure this out.” But, of course, things were more complicated than I first thought. (They always are.)

In a lot of ways, the things that seemed like they’d be easy were actually the tricky things. You were really clear: This was supposed to be a Dead app. It wasn’t about just displaying what Archive has, or including every single band on Archive, it was about looking at all the known information about the Dead’s performances, and finding a way to integrate it. That was the design challenge that drew me to this: it wasn’t, exactly, about finding a way to display user-generated content, it was about finding the most interesting way to help people navigate a finite, but still mysterious, data set.

I knew in my gut what the best way to get there was: start small, and iterate. What that would mean would be a more limited feature set, and, probably, a web app before developing actual native versions. There would have been less complexity in that approach, and we could’ve validated a lot of assumptions (and probably, because it’d have been live on the web, let people use it). We didn’t do that, though.

Visions of money and fame got the best of me, and I said, sure, sure, why not, app it up, rather than following my gut and building out a web version first. And while the web version would surely have taken longer than I’d planned, I think we might have been a bit further along had we done web first.

But beyond the platform, there was the matter of product management. Because we didn’t have an actual budget or deadline, it was really hard for me to say what features were ‘in’ or ‘out,’ especially since you’d ask a lot of questions like “is something possible?” and my answer would almost always be, “yeah, probably” or “it depends.”

And no, no one needs to know about vape.horse now that the domain has lapsed.

JOSH: It’s very easy to come up with a list of features you want in the beginning. The first days, when you’re coming up with everything you want, are not the hardest days. They’re the most fun days, coming up with your wish list for Santa. (You’re Santa.)

I think basically what I kept saying over and over was, “Just make sure there’s a Charlie Miller label. Or even better, you should be able to click and get all Charlie Miller shows.”

JAMES: Right, and that sounds easy. But then you realize, Okay, how do I surface that Charlie Miller info?

Totally know this is something people want. And I get it. But it’s tricky.

The not-so-secret sauce is us drawing upon the Dead show info. We’ve integrated all that into our own database, and can query that in all sorts of fun ways. But info on specific tapes is contained in Archive.org. We’re actually doing a second query to to get that. What that means, practically, is that we can’t really make our neat searching for shows by songs played work if we’re trying to also search by “sbd.miller.”

To that end, you should probably say something about the provenance of our data.

JOSH: Right. So Justin Mason graciously let us use the data that he'd used for his book (data which also powers Jerrybase). That helped, right?

JAMES: Yeah, of course. It's amazing! And we definitely couldn't do what we have without it. But there's still the matter of having all the elements we want. So, sure, we could have the Charlie Miller filter, but it involves us integrating all of the Archive.org tape metadata into our own database, and ensuring that it stays up to date as the the available tapes change. Not impossible, but added complexity in the parts beyond the app and the database we’re already maintaining.

Do I want to do it? Sure. But I want to be able to focus only on that bit (read: have the app shipped) before I go down that rabbit hole and shell out a few more dollars a month for the necessary cloud services.

How imminent is that? Really tough to say.

And that’s really just the technical considerations: even if we can stitch together the requisite queries to get us the data we want, we’d still want the UX to be elegant. In doing all of the design and build myself, I kind of set myself up for big task-switching challenges, in needing to sometimes be in a database space, other times in a react native space, and still other times in a pure interaction design space.

JOSH: But, honestly, when will this be ready in whatever form? You said a month-and-a-half ago I’d have something working before Dead & Company at Citi Field, which is...tomorrow.

JAMES: Yeah, I did. My bad. New job, new town, new house. Oh, and you’ve got a new baby (congrats!). All those things took more time than I’d expected.

But here’s where we’re netting out:

So it’s a limited feature set, but given the robust search, I’m still feeling okay about it.

Some things that won’t be ready for launch, but I’m still planning on:

But all that comes not only with more complexity, but, potentially, more cost. We’re already paying a bit to run the servers for the database, and a few other things, and while it’s not something I can’t afford, it’s not nothing, either.

JAMES: True. There is that. It’s good shitposting.

JOSH: You and I, plus a couple of friends, have been playing around with a beta—pre-beta? friends-and-family?—version of the app. And it’s working pretty well. So let’s cut to the chase: When can we send that out to a wider audience and let them mess around with what we’ve been working on?

JAMES: I dunno, in the next month or two? Like: there are a lot of known issues. The player isn’t as slick as I’d like it to be, and about a billion other things seem off, but, hey, why wait? There's one specific feature I’m wrestling with right now, but after that, sure, put it out in the world.

JOSH: In the meantime, I'll continue on the audience development side of things (truly insane amounts of shitposting on Twitter).